How to Get Rid of Termites

The most common termite in Arizona is the desert subterranean termite, which is about 3/8″ long, including their wings. Their body is a pale yellowish brown with a rectangular head and their body is flat and almost as wide as the head.

Drywood termites are slightly larger than the subterranean termites, and although they are not as common, they definitely do more damage when left untreated. These are the pests that result in expensive treatments and whole houses being tented, because they actually build their colonies within the very wood structure they inhabit.

How to Get Rid of Termites in Arizona

Termite prevention with a granule termiticide often costs as little as $20 per year for a 2,000 square-foot home! This odorless concentrate acts like a bait: the termite picks up the chemical, does not realize he has picked it up, takes it back to the termite colony, and ultimately destroys the colony.

How to Treat Existing Termites

The process is easy, and the products are safe around pets and children, do not injure the ground water table, and are virtually odorless. Best of all, they last up to nine years.

First, fix any water leaks (e.g., hose bibs, condensate lines) and get rid of any water that collects (e.g., puddles next to house). Then create a barrier against termites by: 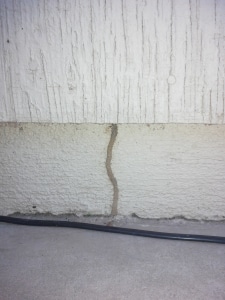 Mud tunnels on your house probably mean you have termites, but if you’re not sure whether you actually have termite activity, bring in a picture of what you see to any one of our Valley-wide stores, and we will show you how to get rid of termites in Arizona!

In general, the larger the mud tunnel, the greater the termite activity. For example, a mud tunnel measuring about a nickel in width suggests many months or even a few years of activity. So, the earlier you observe their damage, the sooner you can prevent their spreading further.

Another sign of subterranean termites is evidence of these tunnels on cardboard boxes, often in the garage. Many people who moved to Arizona from other parts of the country use their garage to store boxes, and termites also like boxes. Especially if those boxes are seldom moved or disturbed, the termites can quickly and quietly infest a home through the cardboard boxes.