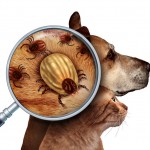 Worldwide, there are hundreds of species of ticks, with more than 25 species in Arizona. Ticks are related to spiders and mites and the most common tick species in Arizona is the brown dog tick. Although they are mainly found on dogs, they may also feed on humans. Knowing how to remove ticks from a dog safely and effectively is a tool every pet owner should have.

Once a tick is found on your dog, it should immediately be removed. Using tweezers, grasp the tick as close to the animal skin as possible and gently pull the tick straight up. Do not twist or squeeze the tick’s body, which can cause it to release fluids into the tissue. After the tick has been removed, clean the area with soap and water, disinfect the tweezers, and wash your hands. And maybe consider giving Fido a treat.

Rocky Mountain Spotted Fever (RMSF) is the most common tick-borne disease in Arizona, although there are typically fewer than twelve cases every year. Lyme disease is also a tick-borne disease, and the Centers for Disease Control & Prevention (CDC) estimates there are 300,000 new cases of Lyme disease nationwide every year. Those infected often – but not always – have a rash at the site where they were bitten, and also usually suffer from similar symptoms, including fever, headache, body aches, and overall pain.

Controlling ticks on pets and in the local environment is the best prevention for RMSF and Lyme disease prevention. Check out our tips for How to Get Rid of Ticks.

Bug & Weed Mart carries the products you need to get rid of ticks fast. Keeping your family and pets safe from tick bites should be an important part of your pest control. We can help!