Bug & Weed Mart Digs In for Neighborhood Clean Up

Bug & Weed Mart Digs In for Neighborhood Clean Up 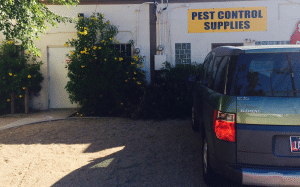 Bug & Weed Mart’s Central Phoenix store has been busy this fall beautifying its Central Phoenix neighborhood. The store, located at Central Ave. and Camelback Road, along with a number of its retail and residential neighbors, was involved in a mini-grant program that helped fund HandsOn, the City of Phoenix Love Your Block Program and the Medlock Neighborhood Association for the Alley Art Activation as part of 2015 Make A Difference Day.

Nearby residents living in the homes behind the shops joined forces with neighborhood retailers to volunteer. The group got down and dirty, picking up trash and debris along the alley, clearing out overgrown plants and weeds, and creating a more pedestrian friendly area. Bug & Weed Mart led the charge clearing out weeds and donated its expertise and products, spraying pre-emergent to help prevent future weed growth and maintain weed control.

In addition to cleaning up the alley, the neighbors installed new directional signage, some artistic decorations along fencing, and plans are in place to add lighting in the coming weeks. They began planning the alley beautification project in early September and started work in October. Final touches should be complete in the coming weeks.

In addition to Bug & Weed Mart, nearby participating retailers included Frances, Stinkweeds, All About Books and Comics, and The Clutter House.

To see the results, stop by and ask us how we might be able to help you tackle your weeds with our do-it-yourself pest control.