Bug & Weed Mart Off to the Races

Bug & Weed Mart Off to the Races 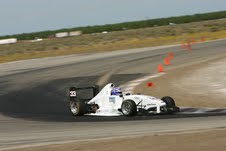 On April 30, John Labrie, son of Bug and Weed Mart owner, Jim Labrie, finished 3rd at the 2011 F1000 Pro Series in Buttonwillow, California. John has been driving for the Bug and Weed Mart team since he purchased his new Phoenix F1K09 in 2009 and switched from DSR to F1000 in 2009. He holds a Sports Car Club of America (SCCA) National License and a Miller Park Racing Association (MPRA) License, too.

[table=2] Since 1979, Bug and Weed Marts have established itself as the favored do it yourself pest control store in Arizona. With locations all over the Valley, including Scottsdale, Phoenix, Tempe, Gilbert, East Mesa, and Mesa, Bug and Weed Mart have conveniently serviced and protected Arizona residents from pest invasions for decades. It was only right Jim would sponsor Johns” F1000 in the Pro Series, extending the same dedication, support and protection he offers his clients, only on the raceway.

F1000 Pro Series presented by GORE, Goodyear Race Tires, WRD and F1000 Manufacturers is a 5-week season of 10 races throughout Washington, Oregon, Utah and California. As the season approaches halfway, John currently sits in 5th place in Drivers Standings with 15pts. The next race is in Kent, Washington for Memorial Day Weekend.

July 1 to 3, 2011: Portland International Raceway in Portland, Oregon
The smallest Pro Series Raceway with 12 turns, but only 1.967 miles long.